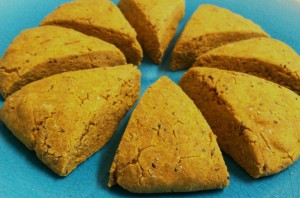 I have played with this recipe for some time now. It all started when I saw this post. I was inspired to make something similar, so I promptly defrosted some of my simple sweet potatoes, and went from there. For the first round, I stuck close to the original concept, but altered the ingredients. I used exactly what I have listed for the recipe below, but left them raw and did a chocolate coating. The initial result was essentially a peanut butter protein cup1.

When I ran out of chocolate and still had some of the filling, I proceeded to see what would happen if I microwaved it. I guess curiosity gets the better of me sometimes when I am in the kitchen. My husband has a name for me when I am in this state (#the mad scientist). On occasion though, my random experiments turn out quite well. (#Aristotle)

This was one of those times. The texture of the microwaved dough was not quite that of a cookie, but also more dense than a cake. It was somewhere between. Thus came to be the microwave scone.

They are high in protein and fiber, low in fat, and thanks to the sweet potato, provide a source of healthy carbs. The addition of chia seeds kicks the nutritional stats up even further.

They keep well in the freezer, making them a great option to keep on hand for breakfast or a snack on the run.

I have also baked these in the oven as cookies. While the taste is just as good, the texture lends more to that of a scone rather than a cookie.

1. Mix everything together in bowl until dough ball is formed

2. Divide the dough equally in half and repeat until you have 8 balls of dough3

3. Form each ball into a rounded biscuit

4. Place one at a time on a microwave safe plate and cook for about 2 minutes, depending on your microwave

1. If you would like to try the raw version, simply mix the batter as above and chill for a bit in the fridge for better handling. Melt a few squares of dark chocolate (I used 60%, but I imagine this one or this one would be uh-mazing). Line a silicone cupcake mold with a layer of the melted chocolate and place a bit of the chilled batter in the center. Then top with more melted chocolate and chill until firm. I pretty much tweaked the ingredients and followed the basics of Anna’s recipe.

2. DO NOT SUB WHEY PROTEIN. If you do try to substitute, stick with a vegetable/vegan blend. Keep in mind, the taste of the protein powder will affect the product greatly. I can’t vouch for any other protein powders in this recipe, as I haven’t tried them.

3. For the sake of aesthetics, I made a batch in traditional scone form when I took photographs for this post, but I usually just make them into biscuit shape.

To achieve the traditional scone shape I used this method:

-Place your dough ball into a cereal sized bowl that has been covered with plastic wrap.

-Use the bowl to mold the dough as pictured.

-Turn out the formed dough onto a cutting board.

-Cut equally into 8 wedges with a sharp knife. 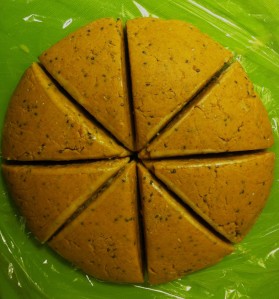 -For easier managing, spray the knife with cooking spray prior to making each slice, as the dough will be sticky.